Like many others I'm spending a lot more time working from home now. This in no way is a new situation for me, but I figured I might as well write a bit about how I work from home given the increased interest. Mostly because after seeing so many complex dev setups recently I wanted to share something that's largely bland. 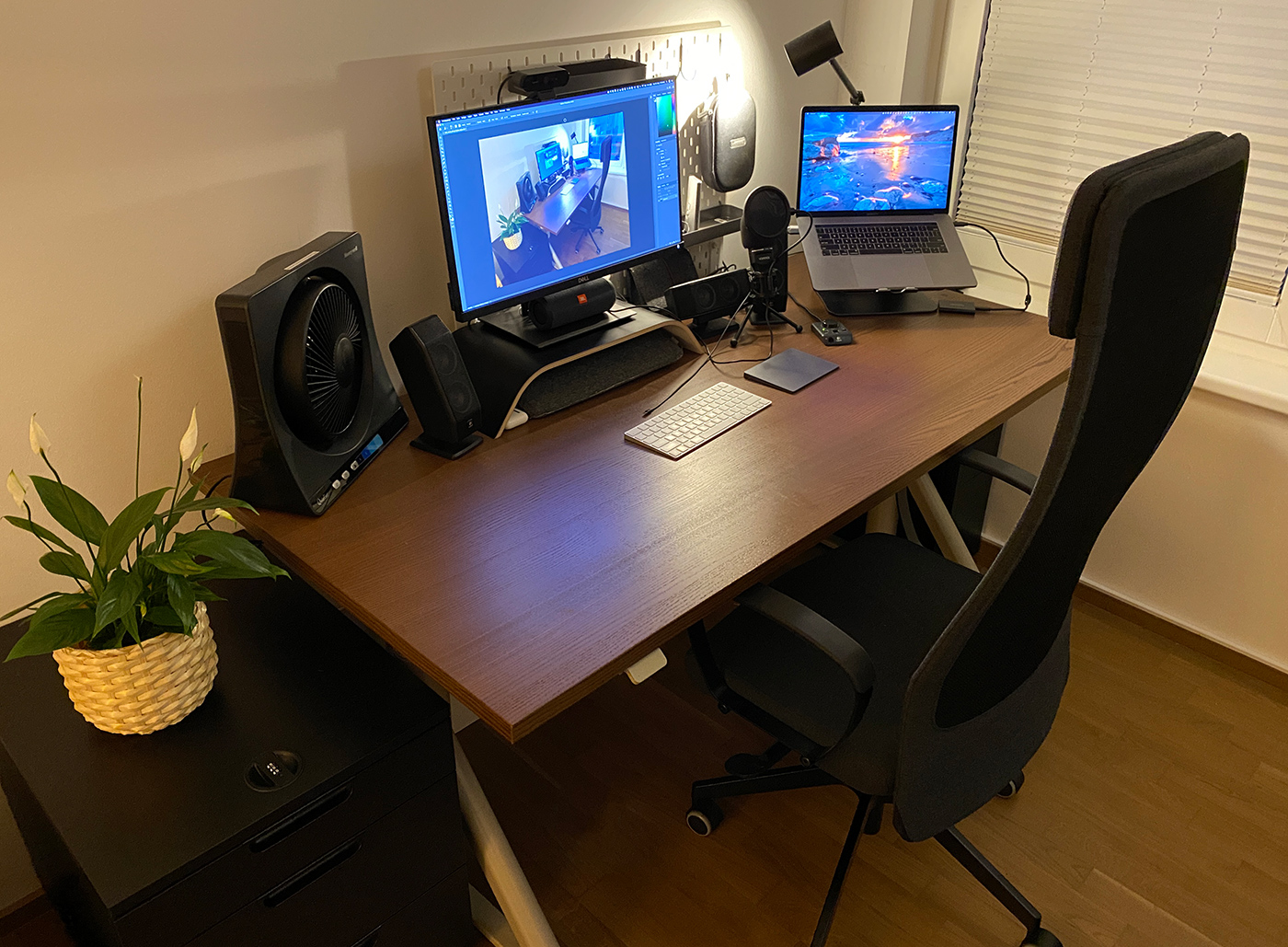 Most of what I have here is from IKEA, like pretty much everything we own in this flat. This is for a handful of reasons. The first one is — and that's quite consistent with my general approach to most things — that it's standardized, mass produced and if something breaks you can get it repaired easily.

The most important items are the IDÅSEN standing desk and the MARKUS swivel chair. Since it's a standing desk that is moving up and down close to the wall I attached a SKÅDIS pegboard behind it. It use it partially for cable management, partially to make sure stuff does not roll down and can lean against. There is also a GALANT drawer unit for storing some things.

The monitor is on top of a SIGFINN monitor stand which I painted black. Below I store my Filco Tenkeyless mechanical keyboard. I have both it and a normal Apple Magic Keyboard connected to it. Like all other things I use a US keyboard layout there.

In total desk, drawer and chair and all the other stuff on it was under 1000 Euro.

I have a desktop PC too but I basically never use it. Since I carry my Macbook Pro around most of the time I just hook it up at home with a monitor. I'm trying to ensure that I can unplug it and continue working with very little interruption. This turns out to be a shockingly complex endeavour still.

It turns out when it comes to USB-C hubs you either have "gives stable power" or "has lots of ports". So I ended up with a pretty straightforward Anker USB-C hub I use for power, and into it I plugged some Chinese off-brand multiport which I use for network, audio out, HDMI and various other things. I intentionally do not link to the adapters I'm using because I'm in no way confident that others will have the same good experience with the same hubs.

It turns out in my case chaining multiple adapters is more stable than the alternatives. Despite this I quite often end up plugging in the power into the laptop directly instead of the multiport. While the power draw itself works pretty well now and I get enough watts from the plug, I'm running into issues with everything freaking out for a bit when I plug the laptop in and out. I noticed things stabilize much quicker when the power is plugged in separately.

In the spirit of keeping as much as possible standardized and simple I am using a touchpad at home as well. I also type pretty evenly split between my Apple magic keyboard and my mechanical one. While I really like my mechanical keyboard, I'm for whatever reason feeling more comfortable on the Apple one for prolonged typing sessions.

Over the last few years my development setup has become more and more boring. This has manifested itself in a few ways: the first one is that I no longer use more than one monitor. I'm basically now largely working of either my Macbook Pro's builtin monitor or my external one. In the latter case the Macbook's monitor is almost exclusively used for keeping Spotify open on it or something else I don't need to use much.

Another change is that I got rid of most of my more complex modifications. I used to have custom keyboard layouts and a ergonomic keyboard, but got rid of all that a while back. This largely comes down to me not wanting to spend so much time on that any more. First of all when you get used to that quite a bit, it annoys you when you no longer have that. The second part is that I felt the need to have this with me on the go as well.

So I optimized towards getting the most out of the most widely available devices. When my Mac breaks I can buy a new one quickly and get it recovered within a few hours from backups. The keyboard I use the most (Apple keyboard) can be bought also anywhere quickly in the US keyboard layout I want. Likewise when I work from the go it's all still the same, and I don't miss much.

When we moved into this flat we wanted to have most of our stuff connected to Wifi. Having had issues with Wifi before, we settled for an Orbi mesh setup. This turns out to be good enough for all of our rooms in the flat and the balcony and I don't have to fiddle too much around with it to make it work.

That said, I spent more time than I wish I had to on ensuring internet and Wifi work as well as they possibly can. For almost two years I was exclusively working over Wifi and most of the stuff in the flat is connected by it. I did however end up using wired Ethernet for my Macbook recently because it felt odd paying for more bandwidth than my Wifi supports.

On the other hand I'm obsessed with small improvements. I already mentioned that I spent a lot of time making the docking/undocking experience work well. This has manifested itself largely by trying out a ton of different USB-C adapters and devices sadly. It seems like there is no magic solution that works for everybody. When I plug my Macbook in the speakers, microphone and webcam switch automatically from built-in to the stuff standing on my desk.

There is also a lot of cable management going on. Quite a few cables are fixed against the board in the back of the desk, some cables are in the net underneath, others are in a custom cable duct I added. In the ideal world there would be less cables but unfortunately there is quite a bit. The trickiest bit is that some cables need to extend in length when the desk is moving up.

Lastly, the IKEA IDÅSEN desk has the disadvantage of neither remembering any positions nor does it have the ability to continue moving until you press a button again. Considering how long it takes to move up and down this got old, so I wrote a script to automate this. If I write sit-down in the terminal it moves my desk to my preferred seating position and stand-up brings it to standing position. This is accomplished by a small node script which sends the necessary commands to the desk via bluetooth. I also show the status of the desk in my shell prompt which will alert me gently if I have been sitting actively for more than 30 minutes. This timer resets either when I take a break for 2 minutes or when I move the desk to standing. This is what it looks like when the desk is moving up and down controlled by the shell.

This entry was tagged covid19 and desktop